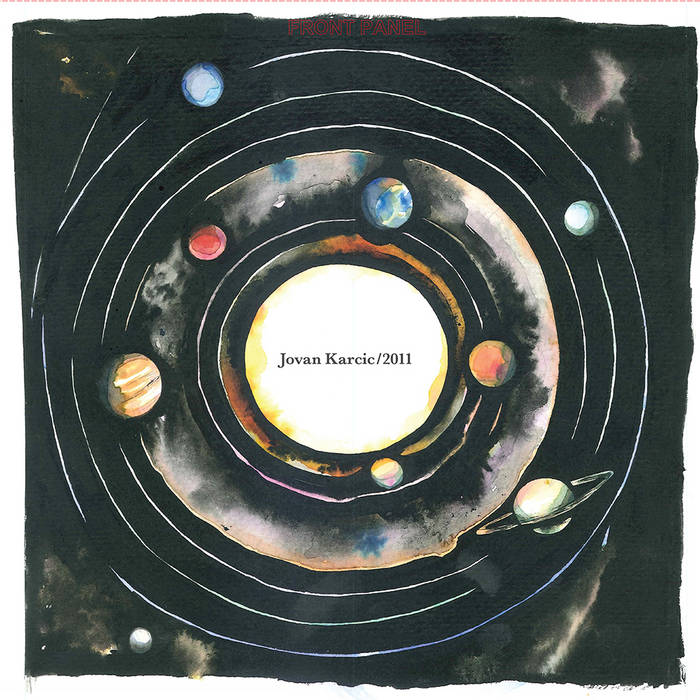 2011 is the title of Jovan Karcic’s second solo album and it is his sonic shadow of that year. Recorded mostly alone, and originally released locally as an edition of 53 (!!!) hand-drawn oil/crayon/ink/chalk covers, Karcic sits nicely beside other DIY loners like Michael Yonkers, Bob Trimble, and Dave Cloud.

Karcic has shuffled throughout central Ohio as a sideman for almost 20 years. Highlights include Gaunt, Scrawl, The Black Swans, Haynes Boys, Alwood Sisters, and Cobra Verde. But as he says, “I’ve played music for other people since I was 13; that’s for the outside world.”

Growing up in Cleveland, where WMMS was king, the words “solo record” were learned when DJ’s referenced auteurs (control freaks?) like Pete Townshend, Todd Rundgren and Prince. It was an attractive model to Karcic, who could handle multiple instruments at a young age and liked to be alone. After experiencing the massive limitations of bouncing sound across the room between two tape recorders and stereo speakers, Karcic graduated to a Fostex X-15 4-track, purchased with paper route money after seeing it advertised alongside a Sgt. Pepper’s LP. For the next 20 years he secretly documented his muse, but publicly he played only other people’s songs.

In 2010, Karcic found inspiration in two best-selling books that helped him move forward: Patti Smith’s Just Kids and Julia Cameron’s self-help manual, The Artist’s Way. In Smith, he found “permission to be an artist not just in secret,” while Cameron’s chapter on “Morning Pages” exercises (write and move on) taught structure. Using an Apple Powerbook G3 and ProTools Free, Karcic recorded alone in a garage once shared by his bands, Gaunt and Scrawl, as well as New Bomb Turks, V-3, and many others. He built songs from the rhythm up: drums first, then a Casio CZ-1, whatever guitar was leaning against his amp, bass, vocal melody, and, finally, words. Only a cousin to rock music, it sounds like a murkier Parade-era Prince and Amon Dull II through a Midwestern filter with lyrics personal and cryptic.

In 2012, Karcic self-released his first solo album, 2010. He sold through 300 vinyl copies in Columbus, Ohio record shops. Its cover was a scan of a needlepoint by his grandmother, Baba Jeca, of a small boy. She told Karcic the boy reminded her of him. Both 2010 and 2011 were mixed by Keith Hanlon (Ed Askew, the Black Swans).

This album, 2011, is the second in what is sure to be a series, and his first for the Scioto label. Jovan Karcic is having conversations with himself, and setting them to music, one year at a time. Decoder ring not included.

Most instruments by Jovan Karcic.

Lacquers cut by Mr. John Hull at MusiCol, where the vinyl was pressed. Thanks Warren.

Many thanks to the excellent musicians: Keith Hanlon, Chris Forbes, Ian Mykel, Jon Beard and the Alwood Sisters.

Special thanks to Kyle and Lost Weekend Records for selling the original 53 copies of 2011, as well as the 2010 LP.